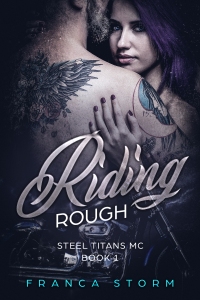 Mason Cross safeguards club security.
He’s Sergeant-at-Arms for the Steel Titans MC.
Running protection detail on someone should be a walk in the park.
And it would be.
If it was on anybody but HER.
Lucy Taylor.

He’s stayed away from her for a reason.
But now they’ve been thrown together, all bets are off.

The beast wants out of its cage.
To take her.
To devour her.
To claim her.

But that would mean breaking a code. Betraying a brotherhood.
Just cuz a man wants something doesn’t mean it’s right to take it.

But she’s more than a want. She’s a craving. In his bones.
A woman who makes a man want to brave chaos and even Hell itself

Besides, this biker’s always game for a rough and wild ride.

Cole Taylor is the top enforcer for the Steel Titans MC.
Their most loyal soldier.
Their go-to for dealing out pain, punishment and justice.
A formidable deterrent to enemies far and wide.
Turning rage into power makes him an unstoppable force.

Until he’s sent on a mission to HER.
Natasha “Nightshade” Ireland.
A well-known troublemaker, hated by the club.
An old flame he’s never been able to forget.

A shocking revelation ups the stakes for them like never before.
It’s time to take a stand.
Time to risk it all.
Time to put something ahead of the club.

He’ll wage a war to make it happen.
To protect her.
To claim her.
To finally bring her into his world.

He’s not letting her go this time.
No matter the cost.