The first book in the Circle of Darkness series is out today!

One tough Alpha wolf
One bloodthirsty vampire
Throw in a dominant warlock, a soldier of the enemy, and deliciously dark chaos reigns. 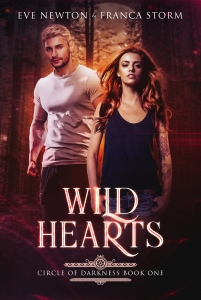 ~Aria~
I’m in some big-time trouble here. My father was killed by the greatest threat the supernatural world has ever seen. Now I’m expected to take up the mantle. Seriously? Do I seem like I have a death wish?

It’s bad enough having to work with a stubborn, high-maintenance vampire chick. But then an enemy soldier comes calling, wanting a piece of me too? Sure, he’s majorly hot. Doesn’t mean I’m gonna drop on all fours for him.

I’ve got enough trouble on my hands with a vengeful ex, the enemy hunting me down like I’m some kind of rabid dog. Oh, yeah, and all this weird prophecy stuff.

~Ember~
My complicated life, just got worse. A dangerous megalomaniac has been hunting me for decades. Guess what? He’s my father. As if I don’t have enough on my plate, my visions of an ancient prophecy are bringing me closer to the eye of the storm.

I’ve been paired with an antagonistic, smart-mouthed Alpha wolf, a woman I can barely stand. Not to mention, an arrogant warlock who’s intent on making me his. Over my hot body!

At least I know this waking nightmare has an end in sight. We only need to take down the most ruthlessly powerful army of maniacs in history, while avoiding my father at the same time.

How difficult can that possibly be?